“It’s worth keeping your patience and taking your chances”

Ilia Gruev speaks to the media

At the start of the season, Ilia Gruev often found himself occupying the substitutes’ bench on matchdays, but now, 14 games into the season, the story has changed. Gruev has started and played the full 90 minutes in all of SV Werder’s last seven games. “I’m over the moon at the moment!” said the Bulgarian U21 international on his current run of games. Speaking to the media on Wednesday morning, Gruev gave his word on his personal resurgence, upcoming opponents Holstein Kiel and more. 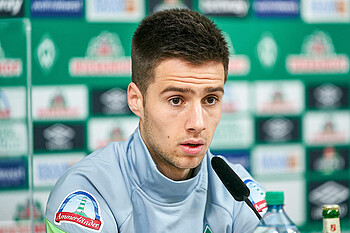 Ilia Gruev in his interview on Wednesday morning. (Photo: nordphoto)

... the mood in camp: “The mood within the squad is very good. We’re concentrating solely on sporting things and our focus is fully on Saturday’s game in Kiel. We all have a single aim. Of course, a departure like the one we had is unfortunate, but that’s just how it is in professional football sometimes. As a result we’ve all come a bit closer together.”

... current interim head coach Christian Brand: “He introduced himself to the team in a very normal way. Some of the guys know him, some don’t – I first met him when I was in the U19s, as he was U17 coach at the time. He also sat on the bench last Saturday at the Schalke game and worked his way into the setup very quickly. He’s been at the club a long time and is constantly talking to Danijel Zenkovic. The two of them are working together.”

... changes to daily routine following the change of coaches: “It’s not been much more difficult – we trained like normal yesterday. We did similar drills and practiced comparable things, so it wasn’t a huge difference for me. There’s nothing that’s changed from one day to the next.”

... his sudden return to the starting XI: “I’m over the moon to have been able to play consistently in the last few games. Things change quickly in football – in the first four games of the season I got no minutes at all, but I’ve played the full 90 in the last seven. It’s worth keeping your patience and taking the chances you get given.”

... upcoming opponents Holstein Kiel: “In my opinion, the table is a bit misleading. Yes, they’re in 16th, but they play good football and are pretty dangerous. Despite their latest loss against Heidenheim, we need to stay focused to be able to win this tricky game. We’re unbeaten in our last four and will do everything we can to keep this run going in Kiel.”