“I can be a bit short-tempered at times”

Part 2 of the Anthony Jung interview

“Having a kid completely changes your life,” reported Anthony “Tony” Jung. In Part II of his interview with WERDER.de, the left-back, who recently became a father, spoke about his first few months with the Green-Whites, his expectations before coming to Bremen as well as his passion for dogs.

Tony, there are a lot of big names playing in the Bundesliga 2 at the moment. Was that at all part of your decision to sign for Werder?

Anthony Jung: Perhaps I might’ve been able to find a team in the top flight, but I knew that the Bundesliga 2 was a little more realistic for me. Once I knew that, I set about talking with friends whose teams were currently in the second division. I was a free agent and was patient in my search for a team because I knew a great offer would come up. And I knew that if I signed for a team in the Bundesliga 2, I would be able to play in some exciting games.

You played in the second division a few years ago. What’s different about it?

Anthony Jung: It was a tough league back then and it still is now, and you really have to get stuck in.There are a lot of similarities.

We’ve got a lot of talent in our squad.

Has your time at Werder fulfilled your expectations?

Anthony Jung: My decision felt like the right one a few months ago, and I feel the same about it today. It wasn’t that easy to set any expectations in the first place, though, because you couldn’t tell how the squad was going to look at the end of the window. There was a lot of uncertainty, and I knew it was going to be like that for some time. But I always believed we had a strong squad, and I was certain that I would need to give it my all to get in the team, and I’ve done that well so far.

You’ve got some experienced players in the squad, but also lots of younger ones. How can you help lead the team?

Anthony Jung: First things first, I think the younger lads are doing really well, we’ve got a lot of talent in our squad and everyone is working hard. I think good communication is vital both on and off the pitch, so I’m trying to explain things when necessary. What’s also important is that the younger players are open to being given instructions and to being led. I’ve not had the feeling so far that any of them don’t want that. The younger players listen well and want to learn. But they also mustn’t forget that they don’t have to just follow orders – they also need to be able to develop as players on their own, just like a pack of puppies (laughs). And of course, they’re going to make mistakes, but that’s how they’re going to grow and develop.

From the joys of fatherhood to caring for his dogs 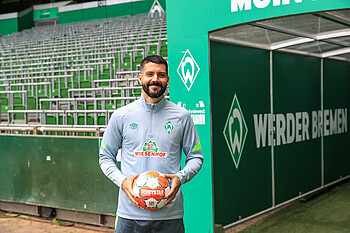 Much younger than some of our lads is your newborn son. What have been some of the best moments since little Levin was born?

Anthony Jung: When I found out I was going to become a father, I started listening to other fathers I knew more closely when they started to speak about their kids. But at the end of the day, you just have to find out for yourself. Having a kid completely changes your life, because you’re not just living for yourself anymore, and you develop a very different view of almost everything. I think we’ve been very lucky with our little boy. If he’s fed, slept and is freshly changed then he’s a little bundle of joy for around three hours. It’s really a lot of fun.

Are your dogs jealous?

Anthony Jung: No! We were a little nervous that might happen, because both our French Bulldogs take time to get used to strangers. It’s important to let the dogs do what they need to do and not just send them away immediately. We did have to move them off from the couch when they were puppies, however. But if the little one is being breastfed and the dogs sniff at his head a little bit then we’re OK with that. I don’t think they’re feeling excluded and I also think they’re coping really well with it all (laughs).

Where does your passion for dogs come from?

Anthony Jung: My wife and I grew up with them, and we always said we’d get a dog when we moved in together, so we got researching French Bulldogs. First of all we got a male one, and then some time later we thought it won’t make too much of a difference to get a second, and we were wrong (laughs)!

One of the dogs is in a wheelchair. What happened?

Anthony Jung: It’s due to a slipped disc injury, and he needed an operation before half a year of physiotherapy, and we hoped he’d be able to stand on his hind legs once again. Our biggest hope was that he’ll be able to ‘do his business’ alone again, and we could take care of everything else. Recently the pain has become too much and the hind legs have not got better so we started to look into what our options were. French Bulldogs are actually very robustly built on their front legs and you can actually buy wheelchairs for them if they lose functionality in their hind legs. You see it a lot more in the USA than you do in Germany at the moment. A lot of people ask us about in the street, because they’re fascinated by it all, and we’ve only received positive feedback. We’ve always said from the start that if the dog gives us and has a poor quality of life, then we will put him down, but we wanted to give him every chance to recover, and now he’s blossoming and has found a new lease of life.

You’re particularly well-known for liking to play video games. Where did this interest come from?

Anthony Jung: I grew up playing computer games. We had a Super Nintendo, a Nintendo 64, a Nintendo Game Cube and a PlayStation. We had them all! And it helped me to keep in contact with my friends after I left home for the first time. It’s got this social aspect to it, but the rivalry was always very important too (laughs). It’s not the easiest passion to give up, even though I am playing considerably less than I used to.

How do you deal with being in the public eye as a professional footballer?

Anthony Jung: You get used to it over time. It’s always difficult to be judged by people who’ve never even played a game of football in their lives, but you have to accept it. As a professional footballer, you’ve got to be aware that you’re in the public eye and your actions are watched more closely than others. But I’m sure that other people in the industry are under much more scrutiny than me.

When do your Spanish roots come out?

Anthony Jung: (laughs) What is stereotypically Spanish? (thinks) I can definitely be a bit feisty at times and can be a bit short-tempered. When I was younger, I always used to leave a little bit of food on my plate, and my mum always said that was a very Spanish thing to do. But overall, I think I’ve internalised more German habits such as punctuality and reliability.

How many points do you want to be on going into the winter break to be able to really go for it from January 2022?

Anthony Jung: (thinks) I promise that we’re doing all that we possibly can to win every game and to still be in touch with top of the league come the winter break. The Bundesliga 2 is so unpredictable, so on the one hand you’re always going to get loads of chances, but you also need to alert at all times and never get lazy. The win in Nürnberg was a huge relief. Even though we went 1-0 down, we kept pushing and we knew we could still turn it around. We had the right attitude, we believed in ourselves and we kept attacking despite conceding early on and marched on. It was brilliant to get our reward at the end of the game. We sent an important signal out to the other teams and we should take that with us into the rest of the campaign.

In Part I of his big interview, Anthony Jung spoke about his professional career, his time in Denmark and his relationship with his Spanish father.