“We felt free just having a kickabout”

The big interview with Eren Dinkci – Part I

Playing professional football for SV Werder Bremen is a childhood dream come true for Eren Dinkci. In part I of our big WERDER.DE interview, the Bremen-born attacker talks about why it took him a long time to kickstart his career with the Green-Whites, before the step up to first-team football swiftly followed.

WERDER.DE: Eren, you’re one of the faces of the SPIELRAUM project, which aims to give children and young adults from in and around Bremen a route into sports while also making them passionate about Werder. What do you make of the club’s involvement in a project like this?

Eren Dinkci: “I think it’s amazing. Children don’t play as much sport as they used to. I always loved playing sports, at kindergarten or at school. That’s why I’m proud to be part of the SPIELRAUM project and try to get across to kids how important it is to stay active and how much fun it can be. I have really enjoyed our trips to different areas so far, like Blumenthal and Tenever.”

Kickabouts on the streets “absolutely crucial” 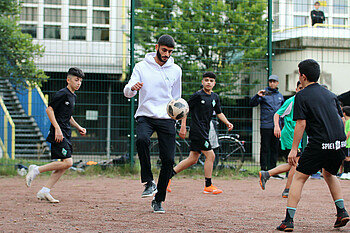 Eren Dinkci is an ambassador for the SPIELRAUM project (photo: Holzmann).

WERDER.DE: You were born in Bremen. Which areas do you know best from your childhood?

Eren Dinkci: “I think that I know every part of Bremen quite well. I pretty much played football everywhere. We moved from Hemelingen to Tenever a few years ago, and that’s where I call home now. Tenever doesn’t have the best reputation, but I feel right at home and did my A-levels there. It’s a vibrant and lively multicultural area.”

WERDER.DE: How important was having a kickabout with your mates on the street when you were younger?

Eren Dinkci: “It was absolutely crucial. I played a lot on those rubber pitches they have in Tenever and in Blockdiek, where I still have two really good friends. As kids, we just went out and had fun – we just felt free having a kickabout. Sometimes we’d play football from morning until night without eating – we just drank our iced tea (laughs). That was the best part of our childhood.”

WERDER.DE: Do you still go and have kickabouts?

Eren Dinkci: “If we have a few days off, I start getting withdrawal symptoms from football. I will go and have a kickabout with my younger cousins on a pitch somewhere or in their garden in Sebaldsbrück. I go there a lot after our recovery sessions on Sundays too.”

WERDER.DE: You have already played for a number of Bremen-based clubs. How did that all play out?

Eren Dinkci: “Until U15s level, my dad was my coach – he used to play football too. We started together at SV Hemelingen. We were there until U11s level, then we went to TuS Komet Arsten. I made a lot of friends there and the parents were all really close too. After a while, a big group of us joined ATSV Sebaldsbrück, and we had a really strong side. Werder were the only team we would lose to. We then moved to FC Oberneuland together and we had one of the best youth teams in Bremen. We won the futsal state championship with a group of players born 2001, even though we were younger than the other teams. I have really fond memories of that. My dad then quit coaching when was in the U15s at FC Oberneuland.”

WERDER.DE: What came next for you?

Eren Dinkci: “I wasn’t as developed physically as a lot of the others in my age group, so I ended up going back to ATSV Sebaldsbrück for a year. I was playing with the U17s as an U15s player, but I wasn’t playing with my friends anymore and I fell out of love with football a little bit. I’m very thankful to my dad and my uncle for always pushing me on though. My dad would go and play football with me alone. He would always encourage me to keep playing, saying: ‘It doesn’t matter if you end up playing in the Kreisliga or the Bundesliga, keep going.’ My uncle, who lives in Sebaldsbrück, would go to watch every training session and always supported me. After a year in Sebaldsbrück, I joined SC Borgfeld’s U17s. I didn’t play at first, but I scored a goal on my first appearance and then I just kept scoring. We got promoted to the U17s Bundesliga, which was the highlight of my youth career.”

Trial opens the door to the U19s Bundesliga 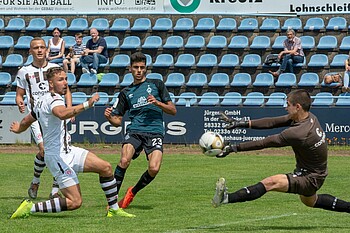 WERDER.DE: Was it always your childhood dream to become a professional footballer?

Eren Dinkci: “I’m pretty sure every kid that plays football dreams about that. I wasn’t any different. When I was playing at U17s level, I was invited for a trial at Rot-Weiß Erfurt, but they didn’t end up taking me. I started to genuinely doubt if it was going to happen for me and thought that it was going to be really difficult to get into a club. I just focused on playing in Borgfeld with my friends and would wait and see where it would take me.”

WERDER.DE: How come you hadn’t already started playing for Werder by that point?

Eren Dinkci: “I used to train regularly with Werder at U9s and U10s level, right through to until U14s level. Some of the others would always ask how is it that I’m not playing for Werder. To be honest, I don’t know why. I probably just wasn’t good enough. I never really gave it that much thought.”

WERDER.DE: You did end up joining Werder in the end of course. How did that come about?

Eren Dinkci: “My coach in Borgfeld managed to get me into a scouting tournament in Duisburg with a selection of U18s players from Bremen. There were scouts from every club there. I scored in our second game, and got a goal and an assist in our third. I remember having a really good game against the Bavaria XI in our final match. That caught FC Ingolstadt’s attention, and [then Werder U19s coach] Marco Grote invited me to a trial as well. I was due to take part in five sessions, but after the second one, he said that he wanted me to be part of the Werder team the next year. I was over the moon.”

WERDER.DE: Did you go to a lot of Werder’s Bundesliga home games as a kid?

Eren Dinkci: “Whenever I could be, I was there. We had season tickets at one point. My dad and I had seats above the standing section in the Ostkurve one season. I remember Werder’s 3-2 win over Real Madrid in the Champions League really well – I was in the stadium that night.”

WERDER.DE: Which Werder players did you enjoy watching the most?

Eren Dinkci: “Claudio Pizarro, always Claudio Pizarro (laughs). I still remember Werder being 2-0 down to 1. FC Köln at half time and they ended up winning 3-2 thanks to a Pizarro hat-trick. The whole stadium was singing his name – it gave you goosebumps.” 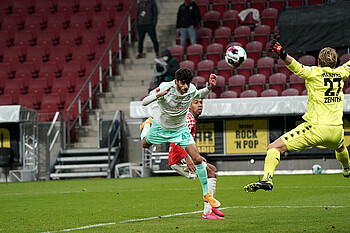 WERDER.DE: You’re now one of those players out on the pitch. What memories do you have of your Bundesliga debut in December 2020?

Eren Dinkci: “The first thing that comes to mind is of course my goal. The ball came my way and all of a sudden, it was in the back of the net and everyone was running towards me. My other memory is training with the U23s on the Friday morning and our fitness coach Henrik Frach coming up to me and saying: “You’re training with the first team today.” The session wasn’t until at 1pm, but then at 11am he rang me said: ‘You’re probably going to travel to Mainz as well. Do you need to get anything from home?’ I laughed and said: ‘Henrik, I have nothing with me. Of course I need to go and get some things.’”

WERDER.DE: How were you feeling in that moment?

Eren Dinkci: “I got quite nervous. I went home and my mum said to me: ‘Why are you packing your things? You don’t have a game this weekend.’ The U23s’ season had been postponed due to coronavirus. I told her: ‘I’m flying with the team to Mainz.’ I will never forget the smile on her face. A few hours later, I was sat on the plane.”

I have watched the goal back a few times

WERDER.DE: How long did it take for it to sink in that you had achieved something historic, scoring with your first touch in your first ever Bundesliga game?

Eren Dinkci: “To be honest, it’s still hard to really believe it. It took a long time to sink in. I have watched the goal back a few times and my uncle would send it to me every day and write: ‘Yes, that’s really you, the one scoring’ (laughs).”

WERDER.DE: What were the first weeks after your Bundesliga debut like?

Eren Dinkci: The biggest change was training regularly with the first team, something I’m incredibly grateful for. It’s a huge honour. I only played with the U19s for one year, and then I had eight games with the U23s before stepping up to the first team. I still sometimes can’t quite fathom how quickly it’s all happened, especially when people come up to me and ask if I’m the Werder player Eren Dinkci. I have a huge amount of respect for the professional business. After all, everything can change in an instant, like if you suffer a serious injury.”

Part II of our big WERDER.DE interview with Eren Dinkci will be published later this week