“Too many underwhelming performances”

The reaction to the 3-0 defeat in Darmstadt

The 3-0 win is followed up by a 3-0 defeat. Just as in the last away game in Dresden, SV Werder played poorly and were deservedly beaten against SV Darmstadt. “Every one of us knows, that we were all very, very poor today with only a couple of exceptions,” commented Nicolai Rapp after the full-time whistle. The overarching themes of the post-match interviews concerned a lack of pressure up front and the stop-start nature of Werder’s season.

Markus Anfang: “Today was nowhere near what this side are capable of. We barely attacked in the first half, even though the space was there, which I struggle to understand. We let every pass run away and did not search for a way through in attack. Everyone on the pitch could have done better, which is what we wanted to do. Overall our performance didn’t justify us coming away from the game with anything.

Nicolai Rapp: “We knew exactly what we were in for today and we’d made a plan accordingly. However, we did not implement that on the pitch. Darmstadt pressed high but we weren’t able to stretch the pitch and build pressure in this way. We made too many errors on the ball and we didn’t win any challenges, which makes it really difficult to stick to your game plan. We wanted to avoid a game such as the one in Dresden but we were actually worse today. We need to analyse the reasons for this and be more consistent in future games.”

Marvin Ducksch: “Once again, we didn’t carry out the game plan we had going into the match. We wanted to do better than we did against Dresden but we were actually worse, and we won’t get promoted playing like that. I couldn’t give you a definitive reason why the game was like that so shortly after it’s ended. We knew what we were up against, we knew how our opponents like to play and we knew which spaces we needed to create and exploit, and we simply didn’t do that.

On the mistake which led to Darmstadt’s second: 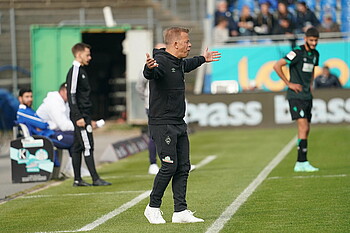 It was an unpleasant return for Markus Anfang (photo: nordphoto).

Markus Anfang: “That wasn’t the turning point in the game. It doesn’t matter who makes the error. It was bound to happen given that all we’d done until then was play it backwards. We were simply punished for this.”

Frank Baumann: “The second goal was symptomatic of the game. We could have kept our heads up and start to play more attacking, but instead we continue play it backwards. We didn’t play it any quicker after the goal, and our game lacked tempo overall.”

Nicolai Rapp: “I didn’t see the opponent and wanted to get the ball moving. I don’t usually make passes like that. I’ve already apologised to the team for the mistake. I always think you can get back in the game at 1-0, but it gets tough when it becomes 2-0 and 3-0.”

On the team’s development:

Markus Anfang: “We win 3-0, then lose 3-0. We’re up, then down. Of course our team is capable of getting better, but we actually need to make this development. We can be measured based off of our progress.”

Frank Baumann: “We’ve dropped too many points. We’ve put in too many underwhelming performances, and we need to change that as soon as possible, otherwise we won’t achieve our goals again this season. We weren’t expecting the team to walk the league but we are lacking conviction and self-confidence. It will take time but we need to play with more confidence after positive results such as the one against Heidenheim.”

Marvin Ducksch: “We’ve got a young team, but we also have several experienced players and the younger lads already have a few games under their belt now, which should allow us to make progress. I always try to lead by example on the pitch. Sometimes it doesn’t work out, but I’ve only just arrived here. I will keep trying to do even better.”