The Werder match reaction to the home win over Erzgebirge Aue

4-0 on debut! New Werder head coach Ole Werner couldn’t have asked for a better debut. But he didn’t want to put himself into the limelight after the final whistle blew on Friday evening. “The lads have been through quite a lot in the last few weeks. They worked really hard for the win today and deserve to celebrate with the fans this evening,” said Werner, who saw his time put in an excellent performance but also saw some things that his team can improve on.

WERDER.DE summarises the match reaction from the comfortable victory, including what the new head coach wants to work on in the next few weeks, how Romano Schmid felt after scoring his first-ever goal for Werder Bremen and what ‘Man of the Match’ Niclas Füllkrug had to say about how he’s found the first week under Ole Werner.

Niclas Füllkrug: “We clearly showed today that we’re able to dominate a match for 90 minutes. Our opponents weren’t exactly at their best today, but after everything we’ve been through over the last few weeks, today’s definitely been a good start under the new head coach.”

Romano Schmid: “It’s always important to set the right tone to the game early on. To have done that by scoring my first goal was great, but we could have done lots of things a lot better in the first half. We gave possession away a few times, and we need to improve on that.”

Milos Veljkovic: “We wanted to start the game bravely and aggressively without the ball, and we did that. If we always play like that, then we’ll be a real problem for all of the teams in the league.”

Ole Werner: “After a chaotic few weeks it was important that this game went well. We got off to a great start and then made it count by going in front. That gave the team real confidence from the off. It’s obviously a perfect result but there are also some things which we didn’t do so well – for example we gave away the ball quite cheaply on a few occasions, we weren’t very clinical or precise on some of our counter-attacks, and at times we didn’t quite play it right at the very end. There’s a lot of work for us to do, but you can still say that lads performed well today, without a doubt.” 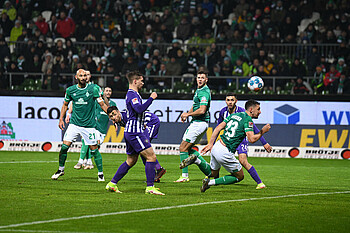 Niclas Füllkrug: “Ole’s given us a clear structure and real support so that every player in every position knows exactly what they’re doing. We know it’ll take time and that everything’s not going to change overnight, but tonight was definitely a really important night for some of the lads.”

Romano Schmid: “He didn’t completely change everything around, but he has introduced some new ideas and you could see that today. A lot of things worked well today, both on and off the ball.”

Milos Veljkovic: “We didn’t want to change everything, because we didn’t have that much time before this match. A few basic ideas were altered, however, and he also told us to believe in ourselves and to be brave.”

Ole Werner: “We focussed strongly on our opposition and worked on our attacking runs. It’s been a good week, the team has worked really hard and I saw them implementing some of the things we’ve done in training. We set up tactically in a way that the lads were used to and that they’ve had previous success in, which worked well.”

Niclas Füllkrug: “I don’t want to let it get to my head. ‘Duckschi’ has also contributed to a lot of goals this season. I find it much more important that we all chip in on the goal-scoring front, just like how Romano did today. It did us some good.”