Be goal-hungry and stay flexible

Nicolai Rapp comes up against his former club

When SV Werder take on Darmstadt on Sunday in the first game back after the international break, it will be another game “for two or three places in the table,” acknowledged Nicolai Rapp. However, the game carries a particular importance for the 24-year-old, as he returns to his old stomping ground.

Nicolai Rapp officially joined Werder from Union Berlin in the summer, but his real home for the previous year and a half was SV Darmstadt. The versatile defender looks back on his time with good memories. “I had a really good and positive time in Darmstadt. After not getting much game time in Berlin, it was important that I was playing games. I know a lot of people who I’ll definitely see again on the weekend” said Rapp. 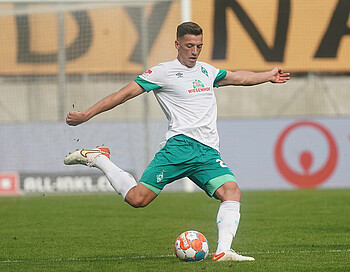 Nicolai Rapp spent a year and a half at SV Darmstadt. (photo: nordphoto).

A reunion with his former Darmstadt coach, Markus Anfang, took place at Werder in the summer. His second spell under Anfang began with an injury before becoming a regular in defensive midfield. “I was always a versatile player, even as a youth player. I can play in every position and just try to help the team,” explained Rapp, who has played in the centre of defence for the majority of his career to date.

It’s also no secret that despite his defensive abilities, Rapp knows where the goal is. With a goal and assist to his name this season, Werder’s number 23 has already had an impact going forward. “I set myself the target of scoring five goals last season and I’m aiming for the same this season. Hopefully I can get a few assists as well.” Maybe on his return to Darmstadt this weekend.

03.12.2021 / Match Report
Your web browser ist outdated.
The web browser you are using is no longer supported.
Please download one of these free and up to date browsers.
Why should I use an up to date web browser?