Romano Schmidt on his first goal for Werder

After 42 competitive games for the Green-Whites, Romano Schmid finally ticked one achievement off his list. The Austria U21 international netted his first competitive goal for Werder during the 4-0 home win against Erzgebirge Aue. “The goal felt really good to me,” he said during a mixed zone interview at the wohninvest WESERSTADION on Tuesday morning. 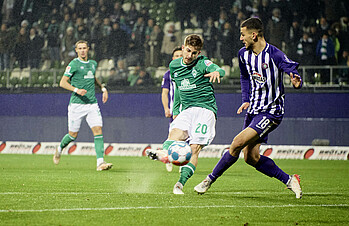 Scoring goals usually isn’t a rarity for the midfielder, as he has consistently proven at the international level. The 21-year-old scored a brace in a 3-0 win against Azerbaijan during the last international break. “I’ve started scoring regularly for the national team, which is why it’s nice to have been able to also accomplish that here. I’m very happy,” Schmid said.

One reason behind his strong performance could have been the change in position, as he featured in central midfield – his favourite position – against Aue. “It’s important to take shots from distance at my position. Earlier in my career I’d try to dribble the ball into the net,” he said. “Even if a shot doesn’t go in, that happens, but when it does it just makes it that much better.”

The prolonged wait for his first goal for Werder was of course weighing on Schmid, as he freely admits: “I’m a sensitive person, which is why it’s not easy to go so long without a goal. Additionally, there was some pressure from outside and some teammates that would tease me about it.” Despite his goal, the Austrian still places the team above his own personal achievements. “Even if I hope that I will now score more often, the team comes first. If the team plays well, then I will also play well. I want to continue scoring goals, even if I’ve become more of a provider over the last one and a half years.”

However, Schmid, who is also the father to a newborn, didn’t overly celebrate his goal after the game. “I went home to my girlfriend and our son and went straight to bed.”

21.01.2022 / preliminary report
Your web browser ist outdated.
The web browser you are using is no longer supported.
Please download one of these free and up to date browsers.
Why should I use an up to date web browser?