The orders have been clearly given

The Kiel game is now a thing of the past as Werder’s focus shifts to their final home game of 2021 against Erzgebirge Aue at the wohninvest WESERSTADION on Friday evening (18:30 CET). Matchday 16 will also be Ole Werner’s debut as the new head coach of SVW and he is feeling confident and well prepared ahead of the game. “We’ve explained to the team what we are expecting from Aue and how we can get set them up to get the best out of them. We’ve discussed several different strategies about how we want to win the ball and how best to act without it. The orders for tomorrow have been clearly given,” said Werner at his pre-match presser.

On the squad: After completing a period of isolation, Mitchell Weiser returned to team training on Thursday morning. “Mitch took part in all of today’s session which makes him an option for the squad,” said Ole Werner. However, Nicolai Rapp, Fabio Chiarodia, Niklas Schmidt and Eren Dinkci willmiss the game due to Coronavirus and isolation-related reasons. Nick Woltemade remains sidelined as he continues to recover from his foot operation earlier this season, and Abed Nankishi has also been ruled out.

Head coach Ole Werner on the opponent: “Aue have been coming along nicely under the guidance of their new head coach and are getting back to playing like their used to. They’re on a good run of form, and so we will by no means underestimate them. They like to play direct football and have a number of different options in attack. But they will also allow us space and time on the ball if we play sensibly and with enough tempo. Our goal and expectation for this game is to pick up three points,” commented the Werder head coach.

Getting back to their old form 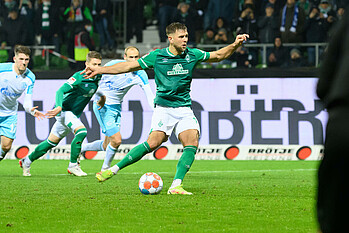 Niclas Füllkrug has scored in each of his last three games in Bundesliga 2 (photo: nordphoto).

The last meeting: Werder Bremen and Erzgebirge Aue have only met once in a competitive fixture when they faced off in a second-round DFB-Pokal tie in 2008/09. Despite going 1-0 down, Werder Bremen turned it around thanks to goals from Markus Rosenberg and Claudio Pizarro and ultimately won 2-1.

The table: The Green-Whites find themselves in tenth place in Bundesliga 2. A home win against Aue could see SVW climb one place higher in the table, whilst Erzgebirge Aue are currently on 14 points and are level on points with the 16th-placed side in the league.

Back on the scoresheet: Werder Bremen striker Niclas Füllkrug has scored in each of Werder’s last three matches in Bundesliga 2, the first time he has achieved this since early 2016 when he was playing at FC Nürnberg. He has never been on a longer goalscoring streak in his career. Füllkrug has also been directly involved in five of SVW’s last six league goals (four goals, one assist).

The head coach’s favourite opposition: New Werder head coach Ole Werner is unbeaten in all of his four games against Erzgebirge Aue (W3, D1). He’s not faced any other side on more occasions without defeat. His three victories against the Violets mean that Werner has not beaten any other side more often than Aue.