Previewing Sunday’s away game vs. Sandhausen

After a disappointing day out in Darmstadt last weekend, SV Werder’s next away game is just around the corner. On Sunday (24 October at 13:30 CEST), the Green-Whites will take on SV Sandhausen – a chance to turn words into action. Head coach Markus Anfang is confident that his team can do just that: "We can create chances and we have the quality to put in a good performance going forward."

Squad update: Ömer Toprak, Christian Groß and Nick Woltemade are still out injured. Jiri Pavlenka was back at training after recovering from his flu infection, but will not be ready to play yet.

Markus Anfang on the game: "Sandhausen are generally difficult to play against. Sure, it’s been said a few times that they like to sit back. What you can’t forget though is that this team has been playing in the second division consistently for years and have often played a big role near the top. They thrive on being aggressive off the ball. The ground isn’t huge, but there’s a good atmosphere in what is a small, tight space."

Previous encounters: This will be the first ever competitive meeting between SV Sandhausen and Werder Bremen, making Sandhausen the 199th club to play against SVW in a professional competition. SVS are also the only current second division side that Werder are yet to play against. 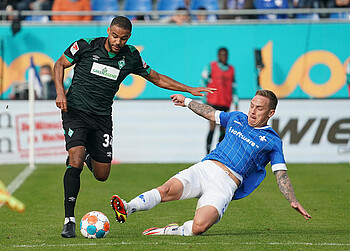 Poor season for SVS: Eight points from ten games is SV Sandhausen’s lowest ever return in the second division – same as in 2018/19. 21 goals conceded at this stage is also a record low for the club. Sandhausen currently have the league’s worst home record – just one point from five games.

Goal threat does not equal goals: Werder Bremen have won back possession in the opposition’s defensive third on 96 occasions this season – a league high. Sandhausen have recorded just 54, which is fewer than every other team. However, Sandhausen have converted one of these incidents into a goal, unlike Werder.

Familiar faces: Two former Werder U23s players in the form of Dennis Diekmeier and Pascal Testroet are in the SV Sandhausen squad. While Diekmeier played just 19 games for the U23s before joining Nürnberg and later Hamburger SV, Testroet made 59 appearances and scored 14 goals.