Mai, Assalé and Plogmann have parted ways with the club

After Werder’s recent promotion to the Bundesliga, the club can announce that three players are leaving the club. Lars-Lukas Mai, Roger Assalé and Luca Plogmann will part ways with SV. 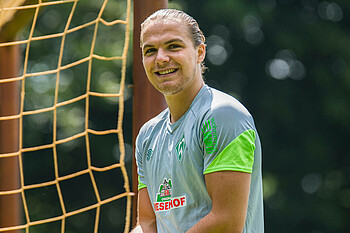 Lars-Lukas Mai is returning to his parent club FC Bayern after a loan spell at Werder. The same goes for Roger Assalé, who is returning to Dijon in France’s second tier after season-long loan in Bremen. Luca Plogmann, on the other hand, is leaving SV after fifteen years at the club. The shot-stopper came through the ranks in Werder’s youth academy and was loaned out to SV Meppen for the 2020/21 season. The 22-year-old is seeking a new challenge after the expiration of his contract.

Head coach Ole Werner made it clear throughout the season that every single player is important, whether they are a regular starter or a squad rotation player. The three players leaving the club supported the team throughout the season and were a vital part of Werder’s successful campaign. Everyone associated with Werder Bremen wishes Luca Plogmann, Lars-Lukas Mai and Roger Assalé all the best for the rest of their careers.