Leonardo Bittencourt on his comeback, his role in the team and the game against Sandhausen.

Leonardo Bittencourt’s return from injury was only a few minutes long in Darmstadt, but it was still a meaningful comeback for the attacker. “The short appearance wasn’t a bad thing, because match practice is very different to training,” said the 27 year old, who spoke to the media about different topics such as his role in the team ahead of the away game in Sandhausen.

… his return in Darmstadt: “It was definitely nice to be back, because I was out for a long time. No player enjoys coming on in a game that has already been decided, but despite that it was a positive feeling to be out on the pitch. I feel fitter every week and I’m now working on getting up to the full workload.” 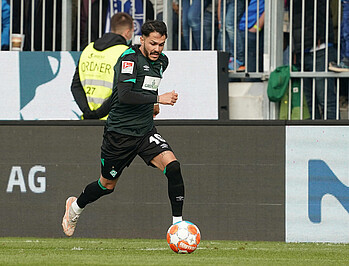 Bittencourt made his return from injury in Darmstadt (photo: nordphoto).

... his role in the team: “My role is the same as before, I haven’t changed – whether that’s in the team council or as vice captain. What counts for me are performances on the pitch. We have a lot of young players and I know that the boys orientate around me, but it doesn’t matter what status you have in the team, how old you are or what your name is. Every single player has to give their all from the first to the last second. We need the winning mentality.”

… the consistency that is lacking in performances: “We’re a young team, games like the ones against Darmstadt or Dresden can happen. Such games hurt, but are also part of an important learning process. Saying that we’ve learnt from it isn’t enough; you have to demonstrate it too. That’s why it’s important that players like Ömer, Grosso or I return, so that the younger players can develop away from the limelight. When I was that age, there were more experienced players who took on that role. Recently, however, it has been the younger players that have had to take on all the pressure.

… a positive reaction against Sandhausen: “I know the team, I know what we have in our team. We have to play our game from the opening minute and be brave. We have to look at ourselves and shake off last week’s game. The game against Sandhausen will come down to duels and the basics and if we can pull those off at the weekend, I’m sure that we can beat Sandhausen.”

… staying at Werder: “I don’t want to be celebrated for staying. Everyone knows that I got injured. If that hadn’t happened, I don’t know if I’d be here now. However, it was always clear to me that as long as I’m a Werder play, I would give my all.”