"Keeping our foot on the pedal”

Prematch info ahead of the game in Aue

Two 90 minute matches remain, leaving a potential six points up for grabs. Those six points are what it is all about for SV Werder as the 2021/22 season draws to a close. Ahead of the last away game of the season against FC Erzgebirge Aue, Ole Werner called himself “unbelievably excited” for the final few games. He also explained that the mood in the dressing room is excellent. Werder will need “a good mix of anticipation, concentration and enjoyment in what we do” if they are to reach the goals set out for them as a team, Werner said at his prematch press conference. “We have to score goals to win the game and then keep our foot on the pedal should we take the lead. Our focus is on getting three points.”

Team news: Werner can count on almost a full squad for the game in Aue. The trio of Ömer Toprak, Milos Veljkovic and Christian Groß, all injured of late, are available once more. “All can play from the start. Then we will see how long they last,”’said the head coach. Just one player is out for the game: “Other than Manuel Mbom, who has torn his Achilles, everyone was on the training pitch and was able to take part today. So they're all on board in that respect.”

Werner on the opposition: “We have to assume that Aue will bring all of the quality that they possess and show that on the pitch. I'm assuming that they are a team that will want to show a reaction after their match and result last week. And for sure they will want to end their season on a high in their last home match, they will want to say goodbye to this league on a positive note. You can speculate on everything else but that doesn't help at all. We always have to assume that our opposition are capable of performing their best when they play against Werder Bremen,” said the 34-year-old.

Hope in the numbers 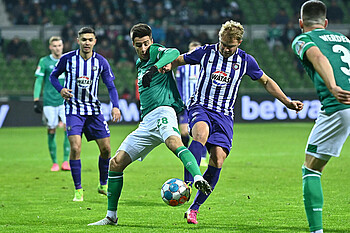 Last meeting: We’ve faced Erzgebirge Aue twice before. The first meeting came in the 2008/09 DFB-Pokal, a 2-1 away win for Werder. Earlier this season we faced off at the wohninvest WESERSTADION. It was Ole Werner’s first game in charge of the club and he got off to a flying start with a superb 4-0 win. Romano Schmid, Milos Veljkovic, Marvin Ducksch and Niclas Füllkrug got on the scoresheet as Werder notched their biggest win of the season.

State of play: Relegation was confirmed for Erzgebirge Aue with a 6-0 loss to Darmstadt last time out. The hosts enter the game second from bottom with 23 points. Werder are also looking to leave the division, but in the opposite direction to our opponents. As it stands, Werder’s 57 points is good enough for third place and a play-off against a Bundesliga side for a place in the top division. SVW are level on points with second-placed Darmstadt, who have the better goal difference but have played a game more after losing on Friday. Schalke 04 lead the way by two points.

Füllkrug’s favourite opponent?: Füllkrug has scored six goals in six 2. Bundesliga games against Erzgebirge Aue, notching four assists to boot. That's more goal contributions than he has against any other team. His first ever goals in the division came against Aue on the 2nd November 2013 in a 6-2 victory for SpVgg Greuther Fürth – it was the first time that a player had ever scored four goals in one second-division game against Aue.

Werner remains unbeaten: Head coach Werner has yet to taste defeat in five league games against Erzgebirge Aue (4 wins, 1 draw). That is the most times he has faced any team while remaining undefeated. He has also enjoyed more victories than against any other side. “I would be delighted if we can build on that positive record,” grinned Werner.