“I think we all saw that the team never gave up”

The match reaction to the 2-2 draw in Sandhausen

A stoppage-time goal secured SV Werder Bremen a 2-2 draw against Sandhausen. Werder took the lead early on through Nicolai Rapp, but the hosts turned the game on its head thanks to a Pascal Testroet brace, and then substitute Füllkrug saved a point for SVW in the 93rd minute with a late equaliser. The overarching theme emerging from the game was the fact that the opponents were allowed so many chances (read the match report).

Markus Anfang: “It was an open game in which both sides had many chances, marked by several mistakes from both teams. We were very offensive in the second half and as we tried to push for a goal, but then we were ourselves caught on the counter. Overall, both teams allowed the other too many opportunities. We were really pushing for a second goal and then we conceded. But we still continued to give it our all, got the equaliser and even could have won it at the end. I think we all saw that the team never gave up.”

Nicolai Rapp: “We’re not out of our depth, but we sometimes make the wrong decisions on the pitch. We planned to attack on the wings if the opposition sat deep. We did that today and also on a couple of occasions last week. We gifted them two goals today, and we didn’t learn our lesson from last week. This week, that has to change.”

Leonardo Bittencourt: “If we look back at Sandhausen’s goals, we’ll see that they all came from our own mistakes. We need to get rid of those, because that’s how we will get better results. Their equaliser was an absolute gift, we were in total control. Then we conceded a second late in the second half. I think we dispelled a few of this week’s rumours that the team is “not intact”, you saw how we conducted ourselves today: we never gave up. If we’d been a bit luckier we could have made it 3-2. We showed great spirit and always came back from any setbacks we faced. But we did give up two easy goals to our opponents.” 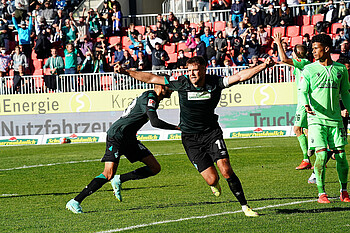 Markus Anfang: “I’ve never had any issues with Niclas, quite the opposite, and I was so happy for him. At the end of the day, he behaved inappropriately and we’ve all moved on from it. I made sure that he was there for today and he returned the favour for me today. It’s important that we make something of the many chances we create.”

Leonardo Bittencourt: “It was a really important goal. I think people made too much out of the events of last week. Fülle proved himself today, he was present and if he’d have been a bit luckier, he’d have got a brace and we would have won 3-2, but he made a huge contribution by scoring the equaliser.”

Nicolai Rapp: “We all know what happened, but it didn’t unsettle any of us. You all saw today how much Fülle means to this team. I’m so happy for him. When he scored, we all celebrated together and everyone in the team is getting on well.”

On the team’s development:

Markus Anfang: “I think we thought we’d pick up three points here today, but when you make so many individual errors, that makes it very difficult. It’s going to be a tough season. But I remember that this time last season, St. Pauli were in a position like ours and now they are top of the table. Nürnberg played in the relegation play-off two years ago and now they are also challenging at the top. That’s the nature of the Bundesliga 2, anyone can beat anyone on their day. For us, it’s now important that we be more consistent. We still have some work to do there.”

Leonardo Bittencourt: “We’re sometimes too naive and play the ball in areas that don’t trouble our opponent instead of getting in behind. Sometimes we need to lure the team out and then we can create space to play in. We shot ourselves in the foot with some of our play because it let the opponent in on the counter-attack. We just need to keep calm – if we aren’t having too much success playing it one way then we just need to find another solution.”

Nicolai Rapp: “We’ve got some strong, confident teams coming up next, who will want to play. Now we have a chance to prove that we can defeat these types of teams.”