“We’ve got closer and closer as a squad”

Clemens Fritz: “It was a very emotional day, both during the game as well as what happened pre-match in the city. I thought I’d experienced a lot at the Weserstadion in my time, but the way in which our fans pushed us on yet again today was unbelievable. We needed one point and regardless of whether they were at the ground or simply in the city today, the fans and the performance the boys put in on the pitch today were worthy of promotion. It’s been a really difficult year looking back at it. Nobody really knew how to correctly approach the second division, and so a huge compliment to the entire team for having achieved promotion.”

Ömer Toprak: “It’s difficult to put it into words. I’m pleased that we actually achieved it today, and I’m really proud to get promoted. I’m happy for the team, the city and the players. I was part of our relegation last year, and it was something which seriously affected me personally. I was embarrassed to have gone down and wanted to put that right. The lads have always given their all. Unfortunately, I wasn’t able to play in all the games, but I always tried to support the lads how I could, so that they could keep giving it everything. Now we can celebrate.”

Marvin Ducksch: “I still can’t quite believe it. I think it’s sinking in more and more every minute. We were all prepared for it, but that it’s actually happened is amazing.”

Ole Werner: “We got the game going the way we wanted it early on, and we executed our plans for the game well. Of course we’d have loved a third goal to top it off, but apart from that, the lads played excellently today. They withstood the pressure well and for that they have my utmost respect.”

Ömer Toprak: “Nothing was stopping me from playing today, even if my calf had exploded, I didn’t care. The coach knew that, and that’s the risk we took. Thankfully my calf held up!” 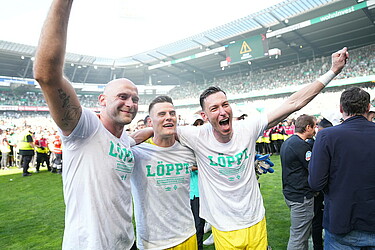 Back to the top-flight: SVW celebrate promotion (photo: WERDER.DE).

Clemens Fritz: “I’m extremely relieved. It took a lot of hard work. Ole came in at a time where there was lots of unrest in the team, and he calmed everything down and established order. He pushed the lads on and demanded a lot from them. It’s a moment we want to enjoy, but we’re also aware that we’ve still got a lot of work ahead of us. However, I don’t want to look too far into the future. We’ve got closer and closer as a squad and are now receiving our reward for our hard work and unbelievable support. The entire city of Bremen carried us to victory today.”

Ömer Toprak: “We had to cope with a lot of new players and then there was a period where there was lots of negative press being written about us. I’m glad we managed to achieve promotion despite the circumstances and stress we endured. We got closer together as a team, we kept dealing with setbacks, we sometimes played terribly which was really embarrassing but stayed together despite this. And now, thank God, we’re promoted. It was important to me that we got the team back where it belongs.”

Marvin Ducksch: “It was a season full of obstacles and setbacks, and we had to fight back from them every time. Eventually we started to gel and everyone knew how they can help contribute to the team. You could see time and time again that we needed every player in every game, everyone got their chances and took them brilliantly. Huge credit to every individual in the side. Especially the lads who kept going even though they weren’t playing as much. I know how it can be when we started to win in consecutive games and put the same team out every week, I know what it’s like as a player to be sat watching that from the sidelines. A huge compliment to the lads for how they managed to deal with that. It just shows how much we’ve grown together as a side – promotion is a worthy reward. Now we need to chill out and enjoy the moment.”

Ömer Toprak: “As soon as the ref blew for full-time, there were a load of fans in front of me. I went inside straight away, because I need a moment to myself. It’s great to celebrate with the fans, especially after what we’ve been through in the last two years. It’s even better to celebrate together with the fans, which we’re going to do tonight and into the morning. Nobody’s sleeping tonight and if they try to, I’m waking them up.”

Marvin Ducksch: “I went to bed a bit earlier last night, so I think I can make up for that tonight.”