SV Werder Bremen suffered a 2-1 defeat to Holstein Kiel in the late Saturday kick-off. The Green-Whites started the game slowly, and it seemed the first half was going to end goalless, but Joshua Mees scored in the 45th minute to give the home side the lead shortly before the break. Werder turned up the pressure early in the second half and equalised through a clever chip from Niclas Füllkrug (57’). SVW then went after the second goal, but Kiel then retook the lead from out of nowhere through Benedikt Pichler (65’) and ultimately the match finished 2-1 to the hosts.

Kiel take the lead just before the break 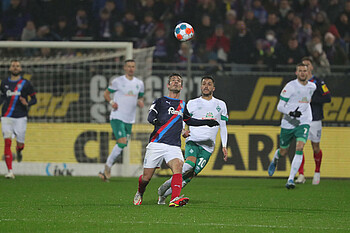 5’: Holstein Kiel get the first chance of the match. Fabian Reese picks out a free Phil Neumann on the right side of the penalty box, who lets fly with a volley that goes just past the left post.

15’: Bittencourt crosses into the centre of Kiel’s box where Niclas Füllkrug is waiting, but he is put off by the defender who ensures that the ball goes out of play.

16’: Straight after that opportunity comes another one! Marvin Ducksch’s shot is saved by Thomas Dähne before Leonardo Bittencourt doesn’t get a good contact on the ball and the chance goes begging.

24’: The ball is crossed well into the near post from a corner, where Marco Friedl flicks it on towards Dähne’s goal, but the ball goes just over the crossbar.

26’: Marvin Ducksch dribbles into the penalty box and squares it to Leonardo Bittencourt, who shoots high and wide from eighteen yards.

33’: The hosts play a long ball in behind, but Pavlenka comes out to avert the danger to make sure Benedikt Pichler doesn’t get to it first.

38’: Good link-up play from Marvin Ducksch and Leonardo Bittencourt. Ducksch plays it wide to Bittencourt, who then returns the favour with a lovely cross into the centre, but Ducksch’s header doesn’t threaten Kiel’s goal and goes out for a goal-kick.

45’: Shortly before half-time, Kiel take a 1-0 lead... Neumann goes down the right flank and crosses into Joshua Mees who shoots acrobatically to turn the ball into Pavlenka’s net.

Werder fail to build on their equaliser and go behind again 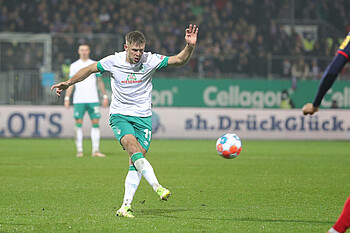 56’: The hosts fashion a quick chance as Benedikt Pichler plays it to Phil Neumann on his right, who has a free shot on goal. Anthony Jung gets a touch on the ball which helps to guide the ball wide of the goal and out for a corner. The resulting set-piece is dangerous for Werder, but fortunately Pavlenka keeps the ball out the goal.

57’: Niclas Füllkrug! 1-1! Eren Dinkci does well to pressure Thomas Dähne on the ball just outside the Kiel box and the keeper scrambles the ball out of play. Marvin Ducksch throws it quickly to Niclas Füllkrug and he takes aim with a clever chipped effort that goes into the top corner from over 20 yards out!

65’: From nothing, it’s 2-1 Kiel. As Bremen grow more and more into the game, Kiel retake the lead. Alexander Mühling has the initial shot on goal and hits the post before the rebound falls to Benedikt Pichler who is free to poke it in from close range.

69’: The hosts then have another opportunity, as Phil Neumann shoots just over from a corner-kick situation.

77’: Niclas Füllkrug has a great chance to head in an equaliser, but he misplaces the header and it goes wide.

88’: Felix Agu charges into the penalty box and tries to shoot past substitute keeper Ioannis Gelios, but he is out quickly to squash the chance.

90+8’: Marvin Ducksch tries to curl it into the top corner, and Ioannis Gelios has to work hard to get across and make a brilliant save with his left hand.

90+9’: Second-half substitute Mitchell Weiser is next to have a go at Kiel’s goal, but his shot is traight at Gelios who saves comfortably.

Summary: A disappointing evening. The Green-Whites started slowly before getting a foothold in the game, but they found themselves behind with just seconds remaining in the first half. SVW came out fighting for the second half and drew level through Füllkrug’s splendid goal. Although they were starting to play better, the hosts regained the lead in the 65th minute, and SVW didn’t do enough in the remaining time to get themselves back into it again.

Werder lose 1-0 to Zwolle in friendly

22.01.2022 / First Team
Your web browser ist outdated.
The web browser you are using is no longer supported.
Please download one of these free and up to date browsers.
Why should I use an up to date web browser?