Werder striker Marvin Ducksch will be hoping to beat his former side this weekend (Photo: Heidmann).
preliminary report
Friday, 26.11.2021 / 17:30

After an eventful week, SV Werder Bremen travel to face Holstein Kiel on Saturday (27/11/21, 20:30 CET). Interim head coach Christian Brand knows what to expect and is full of confidence. “I’m looking forward to the game. We have prepared the team for Kiel and are hoping to see some of what we’ve worked on tomorrow and that we win the game,” he said during the pre-match press conference on Friday

The squad: After recovering from Covid-19, centre-back Marco Friedl returned to team training this week. “Marco has trained well and is definitely an option for tomorrow,” said Brand. Milos Veljkovic continues to work on his comeback from a muscle injury. Nicolai Rapp also misses out after testing positive for Covid-19 and is currently in quarantine. Nick Woltemade also misses out due to injury.

Interim coach Christian Brand on the game: “We will try to improve on certain things from the Schalke game. If we do, then I think we will manage to score some goals in Kiel. We need to be more focused on look to exploit those moments where we have the man advantage. That was something we focused on during training this week and something the team also identified themselves,” Brand said during a press conference. 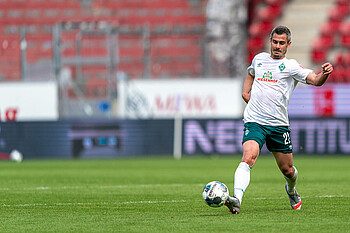 Fin Bartels spent six years at Werder, before moving back to his hometown club in 2020 (Photo: nordphoto).

The last meeting: The last competitive meeting between the sides took place on 22nd March 1981. Back then, Erwin Kostedde scored the equaliser for Werder in the 84th minute as they drew 1-1 in the second division.

Familiar faces: Werder striker Marvin Ducksch will face his former side this weekend, while it will also be a reunion for Fin Bartels. The latter spent six years in Green-White before moving back to his hometown club. Ducksch will also be familiar with this weekend’s opponent, having spent 18 months on loan at Kiel in 2017. He scored five goals in 16 third-division matches during this time.

The table: Holstein Kiel have 14 points from the first 14 games and are currently in 16th place. The Storks have struggled this term, after having nearly gained promotion to the Bundesliga last term, and are locked in a relegation fight. However, a win on Saturday would lift them up into 11th place. Werder meanwhile will be looking to keep pace with the rest of the top half of the table, and could move into eighth place with a win.

21.01.2022 / preliminary report
Your web browser ist outdated.
The web browser you are using is no longer supported.
Please download one of these free and up to date browsers.
Why should I use an up to date web browser?