Motivation faces off against self-confidence

Previewing Sunday’s away game vs. Darmstadt

The international break is over and SV Werder Bremen are back in action on Sunday, 17th October from 13:30 CEST. The Green-Whites will travel to SV Darmstadt 98, a match that head coach Markus Anfang knows will be anything but easy. He believes his former employers have “a really good team that’s full of confidence”, and it won’t just be the strike partnership of Luca Pfeiffer (5 goals) and Philipp Tietz (8 goals) that will make life difficult for SVW.

Team news: Jiri Pavlenka will definitely miss out for the trip to Darmstadt due to a cold. There are still question marks surrounding Marvin Ducksch after he had to stop training during the week with back problems. Leonardo Bittencourt should be back in the matchday squad, however. Otherwise, the Green-Whites will continue to be without Ömer Toprak, Christian Groß and Nick Woltemade.

The head coach’s thoughts: Darmstadt 98 are sure to offer Werder a difficult challenge on Sunday. They currently sit ninth in the 2. Bundesliga table and would leapfrog SVW with a win. “Darmstadt have a very experienced team and have two strikers who have demonstrated their nose for goal. They also have quick players on the flanks that are difficult to defend against. We have trained hard on dealing with that, however. We know what to expect and intend on keeping a clean sheet,” said Markus Anfang in his pre-match press conference. 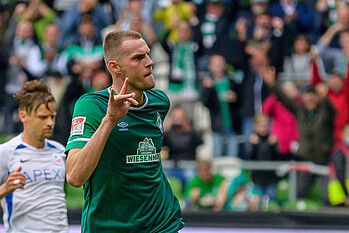 It’s still unclear if Marvin Ducksch will be able to play on Sunday (photo: nordphoto).

Recent meetings: This will be the first meeting between the sides in the 2. Bundesliga. They have faced off twelve times before, including in one friendly. Otherwise there have been three DFB-Pokal ties and eight top-flight match-ups. Werder have celebrated five wins and suffered just two defeats, with the other five matches ending draws. The last match between the sides ended in a 2-0 win for SVW on 4th March 2017 in a close game which was ultimately decided by a late Max Kruse brace.

Ups and downs: Our opponents appear to be lacking in one thing when you look at their last five matches, and that is consistency. Whilst they have defeated Hannover 96 (4-0) and Dynamo Dresden (1-0) at home, they have also had a tough time on the road, losing 2-1 in both Rostock and Heidenheim. In their most recent fixture the Lilies showed their attacking prowess putting six past Sandhausen (6-1) taking Torsten Lieberknecht’s side to ninth place in the league – just one point and one place behind Werder.

Chance creation vs. chance conversion: SV Werder have the highest total of attempts on goal per game (16.78), but the taking of these opportunities leaves something to be desired. The Green-Whites are averaging 1.56 goals per game, but SV Darmstadt are more efficient with their chances, scoring on average 2.33 goals per game from an average of just 13.67 shots per game.

Preview created by WERDER.DE and Opta.

The orders have been clearly given

02.12.2021 / First Team
Your web browser ist outdated.
The web browser you are using is no longer supported.
Please download one of these free and up to date browsers.
Why should I use an up to date web browser?