A look ahead to our game against SC Paderborn 07

Anthony Jung and Marvin Ducksch will want to celebrate another win, in Paderborn on Saturday. (Photo: WERDER.DE)
preliminary report
Friday, 21.01.2022 / 09:50

Last weekend saw the best possible start to football in 2022 for Werder. The 3-0 home win against Fortuna Düsseldorf was the fourth win in as many games under Ole Werner’s leadership. This form means there is a lot of excitement ahead of the upcoming trip to Paderborn on Saturday (13:30 CET). It will definitely be a challenge to earn that fifth win in a row though, as Werder’s head coach knows: “It will be a real test, but we’re looking forward to it. You know that in games like these it’s going to be a tough match for the full 90 minutes, but we’ve prepared the team well and are ready for the game.”

Latest squad news: Mitchell Weiser and Abdenego Nankishi will both miss the game in Paderborn with positive Coronavirus tests. “We’ve got a little bit of hope with Felix Agu that he’ll be able to play,” said Werner in his press conference. Apart from those three players, the Green-Whites will have a full complement for the match.

Ole Werner on Saturday’s opponents: “Paderborn are aggressive going forward and press from the front well without the ball. They are also able to play in a wide variety of formations. The way they always look to play their way through and persevere in playing with the ball at their feet is what stands out for them.”

Keep building up that winning run 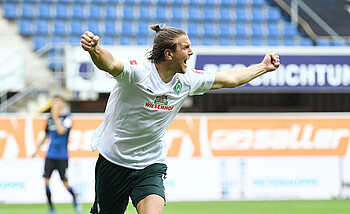 Last time out: Saturday’s game will be the fifth meeting between SVW and SCP in all competitions. The head to head record: 2 Werder wins, 1 draw, and 2 Paderborn wins. The last time the sides met at the Benteler-Arena saw the Green-Whites come away 5-1 winners.

A look at the league table: The win against Fortuna last weekend sent Werder up to fourth place in the standings, one point behind Heidenheim in third. A win this time out could see SVW close the gap to second-placed Darmstadt to just one point. Paderborn are currently in eighth place, on 30 points.

Carrying on the good form: SV Werder have won each of their last four league games, and are now looking to win five in a row for the first time since the 2014/15 season. No other 2. Bundesliga side are currently on a longer winning run than Ole Werner’s team.

The most dangerous striking duo in the league: Marvin Ducksch and Niclas Füllkrug have combined to score six goals this season (both scoring three and setting up three more for each other). That makes them the deadliest duo in the league.

Compiled by WERDER.DE and Opta