"We showed that hard work pays off"

Promotion to the Bundesliga still hasn’t sunk in for Ole Werner just yet. That will probably happen in the next few days, said the head coach in a presser on Thursday afternoon. Werner spoke to the media about promotion, personnel and the challenges that lie ahead next season.

The head coach explained that he is still trying to process what happened against Regensburg on Sunday: “Of course, you look back at the pictures from the game and maybe even read match reports. You try to take in what happened from lots of different perspectives. However, it will certainly take a little while before we fully comprehend what happened at weekend,” said Werner, who also explained how emotional it was on the last day of the season. “It was a very special evening. The enthusiasm in the stadium and on the streets showed us just how much football means to the people of this city. You could see how much the people wanted Werder Bremen to get back to the Bundesliga. To be able to celebrate the promotion was something really special for all of us. On Sunday, we showed that hard work pays off. It was an extraordinary evening and an extraordinary day for all of us.”

The coach, however, didn’t want to go into too much detail about the plans for next season: “I’m just really looking forward to the challenges that lie ahead, even though they are massive challenges. We will face them head on and try to make the best possible account of ourselves. Above all, we want to stay true to who we are.”

Playing the Werder way in the top flight

Werder laid the early foundations for next season with the signing of Amos Pieper and with the contract extension of goalkeeper Jiri Pavlenka. Ole Werner is delighted that the shot stopper is staying with the club: “Pavlas has been really important for us this season. He is calm, reliable and a rock at the back. We are really happy that we can continue our journey together.” The head coach also expressed his joy at the signing of Amos Pieper from Arminia: “Amos has proven himself both in the first and in the second division and he is the sort of character we want in our dressing room.” Werner believes that the 24-year-old has the necessary attributes to help SV next season: “Amos is physically strong, has the ability to play out from the back and is strong in the air. He has already proven that he can mix it with the big boys in the Bundesliga. He can play the sort of football that we want to play here and we are happy that we secured the signing,” said the head coach. 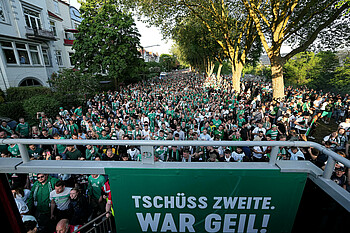 The players and the fans celebrated with each other at the Osterdeich after the game (photo: W.DE).

However, Ole Werner made it clear that this signing was not made because there may be departures from the club. “Amos’ transfer is separate from everything else. We know that he has the quality and we want to have the option of playing with a three-man backline next season. For that, we need at least five-centre backs who can fit into that system and we need options in case of doubt.” Werner also made it clear that nothing has yet been decided with Ömer Toprak: “With regards to Ömer, both sides wanted to talk at the end of the season. That will of course happen. Ömer plays a very important role and he has proven that this season. We will see what both sides have in mind in the discussions,” said the boss.

Ole Werner also made it clear that the team will stay true to itself in the Bundesliga and not seek to change too much in terms of style of play: “Of course, we are no longer a second division team and we will obviously regularly come up against teams who will have more individual quality than us. Nevertheless, our goal will be to bring the identity that we have built up this season and we will want to bring our attacking football to the pitch as often as we can.” According to the coach, his team need to play the Werder Bremen way: “Even if we no longer have 60 percent possession and have maybe 40 or 45 percent of the ball, we still need to play like Werder Bremen.” The gaffer is also aware that Werder will have to adapt to certain things, not least because of the financial gap, but he still believes that there is lots to look forward to: “It is clear that promotion gives us options and opportunities and it opens certain doors for us in terms of personnel.”

It won’t be possible to turn my phone off and completely switch off from football in the next few weeks.

According to Werner, it isn’t just the individual quality that counts at Werder Bremen: “We must continue to play as a team and make sure that everything fits together. The team has to be able to stick together, especially when things don’t go our way or we have one or two weeks where there is nothing to celebrate.” The club is looking to strengthen in all areas to provide this kind of framework. That’s why Werner won’t be able to completely switch off his mobile phone, even when he is on holiday: “It won’t be possible to turn my phone off and completely switch off from football in the next few weeks. I will, however, find some opportunities to put it on silent. I’m planning on going away for a few days so I can turn my mind onto something else. Then I will be able to come back to Bremen feeling fresh and ready to go.”