Yet more good news for SV Werder Bremen from the training camp in Zillertal: Marco Friedl has extended his contract with the Green-Whites ahead of schedule. The Austrian international defender came to the agreement with Werder’s executives on Friday.

“Marco made yet another big step in his development last year, both on and off the pitch. He’s become a real leader among the ranks and we’re delighted to carry on the journey with him,” said Clemens Fritz, head of scouting and professional football at Werder Bremen. 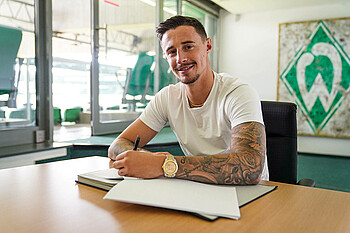 Head coach Ole Werner also noticed a positive step in Marco’s development last season, and is delighted for him to continue in Bremen. “Marco has great charisma on the pitch and adds a lot to our game, especially in terms of his defensive and ball-playing abilities. I’m sure that he’s still got room to develop even further and I’m delighted that he’ll be staying here.”

24-year-old Friedl, who joined the Green-Whites from FC Bayern in January 2018, is also optimistic about his future in Bremen:  “Whilst being at Werder I’ve developed into a Bundesliga player and I’ve been able to make over 100 appearances for the first team. I’m excited to carry on my journey with Werder and will do everything I can to help us achieve our sporting goals next year and re-establish ourselves in the Bundesliga.”

In total, Friedl has made 112 appearances in all competitions for SVW, scoring six goals. He has also won five caps for Austria’s senior national team.

All square in our Bundesliga opener

UNDERDOGS IN THE FIRST TOUGH TEST

“Looking forward to the new challenges that awai ...

04.08.2022 / First Team
Your web browser ist outdated.
The web browser you are using is no longer supported.
Please download one of these free and up to date browsers.
Why should I use an up to date web browser?